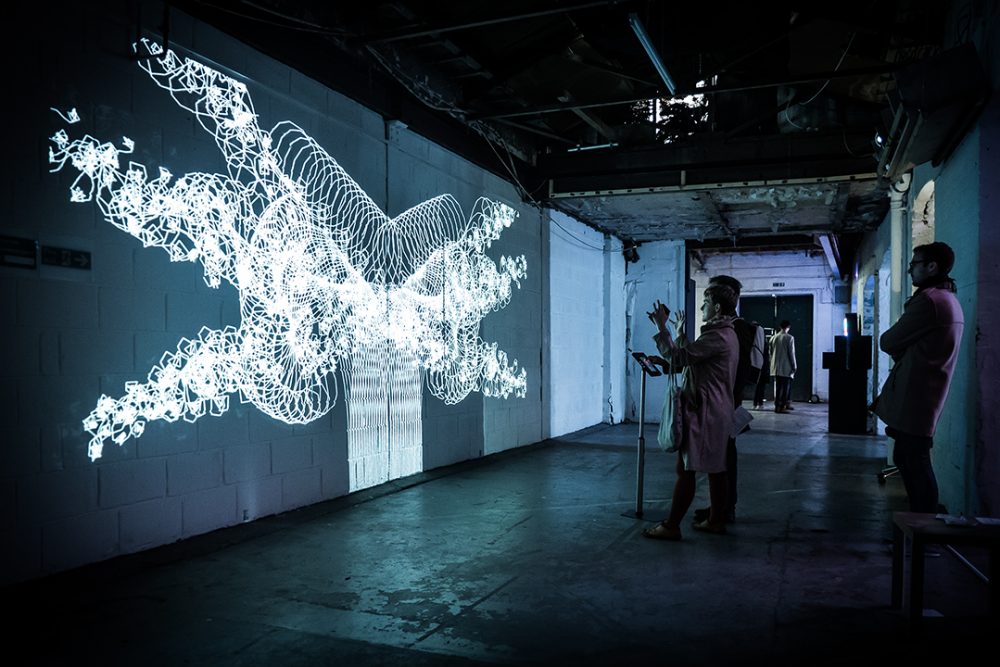 In the interactive installation FLORA abstract lines create complex and delicate shapes, which resemble the appearance of plants. The viewer can interactively control the animation with a touchpad, and thus design the emerging patterns.

The animation in FLORA is generated by overlapping sine waves that travel through a string of lines. This wave principle often appears in nature when energy is transmitted through a medium like water, air or simply a rope. It can also be observed in the locomotion of animals and human-beings, in which kinetic energy is transmitted successively through joints.

The algorithm of FLORA is based on the discovery that a simple system of rotating lines can create endless variations of abstract shapes – ranging from curved harmonious lines to edgy and chaotic patterns. The resulting aesthetics combine computational accuracy with an organic playfulness, and tend to trigger diverse associations in the mind of the viewer.

Philipp Artus is a multidisciplinary artist and filmmaker based in Berlin.
His experimental animations, light installations and drawings explore the manifestations of life through movement, sound and imagery. He composes audiovisual experiences that unite playful elements with minimalist structures, timeless themes with contemporary observations, turbulent acceleration with contemplative silence.

After graduating from the École des Beaux Arts in Nantes/France he spent 2 years studying animation, physics and music theory auto-didactically. He then finished his postgraduate studies at the Academy of Media Arts in Cologne/Germany.
His projects have been shown in various museums, festivals and galleries around the world including the SIGGRAPH Art Gallery in Los Angeles, Prix Ars Electronica in Linz/Austria, Visual Music Awards in Frankfurt (Winner 1st price), Setouchi Triennale Megijima Island/Japan; European Media Art Festival in Osnabrück/Germany; CURTAS in Vila do Conde, Portugal; LUMINALE in Frankfurt/Germany and the Vimeo Awards in New York City.