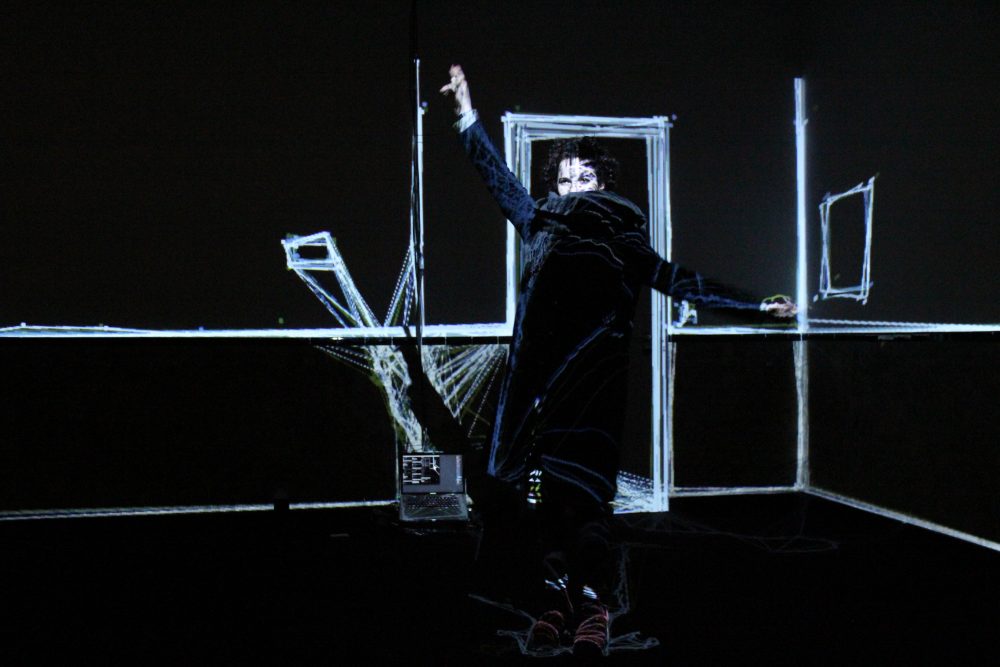 This interactive audiovisual installation invites the audience to get in touch with the space. Architectural elements are highlighted by projecting a reconstruction of the real space consisting of white lines.

Visitors entering the space get tracked by infrared depth cameras. The bodies are transformed into contours projected as white lines together with the architecture.

Tracking data from the depth camera is used to generate midi values. Users can trigger sounds by merging their contours with the virtual architecture. The movement of the user and its relation to certain architectural features gets translated into sounds.

The augmented environment itself reacts on audio input. Sounds captured by a microphone are added as noise to the architectural line structure.

Human interaction creates a feedback loop between visuals and audio, bringing the virtual representation of the space to life.

The installation can be extended to an augmented audiovisual dance performance. Dancers explore the possibilities of being part of the projection and interacting with the architecture.

Space is commonly not perceived, but defined by and reduced to its functions. This is true in daily life and the arts, where spaces serve as a container for the reception, display and storage of objects.

Media installations by mayer+empl aim to refocus common perception by tracking the architectural elements of a space and reconstructing them virtually. Resulting geometric structures are then mapped onto the real architecture via video projection. This interaction grants spaces new life, as they are further characterized by human interactions.

Sounds and noises generated by users are captured by a microphone, transforming virtual interpretations of rooms and highlighting their fragility. Real time sensor data ensures non-repetitive permutations of distortions to these reconstructions.

Space is thus simultaneously reconstructed and deconstructed by light and sound as a living organism sensitive to stimulus.