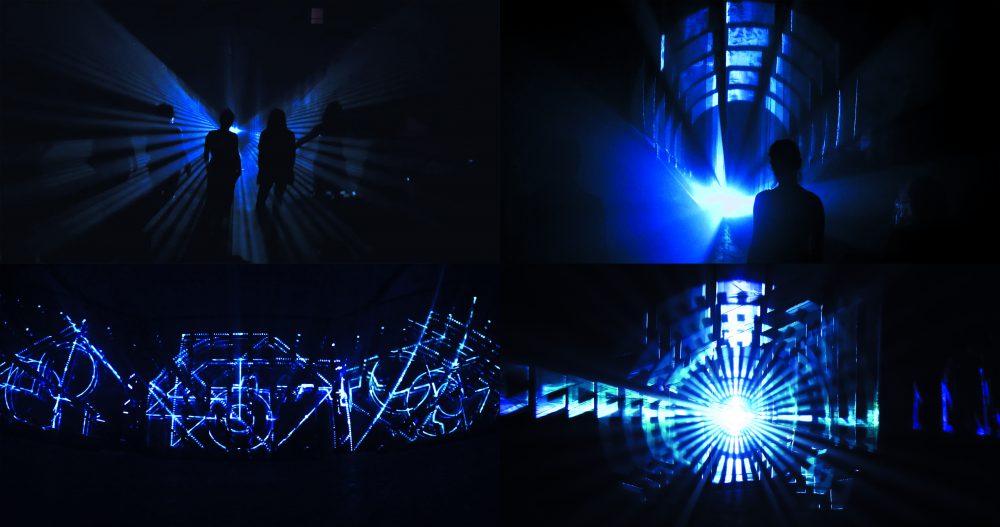 The project is composed by four elements.
The first element is “Sculpture of light like a mirage”
A light sculpture, made of light and fog coming out from the gap in between the multilayered structured cut screens.

The second element is “Three dimensional visual experiment using multilayered transparent screens and video”.  This element converts simple geometric animation like an architectural plan into the three-dimensional image by the use of screens.

The third element is “Control the fan behind the screen and wake the wind.”
This is a projection of an irregular three-dimensional vision by the use of wind coming out of large, electric fans behind the screens.

Finally, the fourth and last part is “Use of unique reverberation sounds from the shape of each architecture.”
Here a large sound amplifier is created to produce spatial effects by using the whole architecture of the space.
This way the artwork creates totally different sound fields by each architecture.

Event takes place during the opening, Wednesday May 17th.

He studies architectural structures around the world and develops new light-space architectured stuctures inside buildings using important elements (light and wind..etc) in completion to conventional architectures. He finds the hidden sound fields and new spaces in the architectures he studies and extends them. Hence his architectural performance can be characterized as expanded generative architecture.