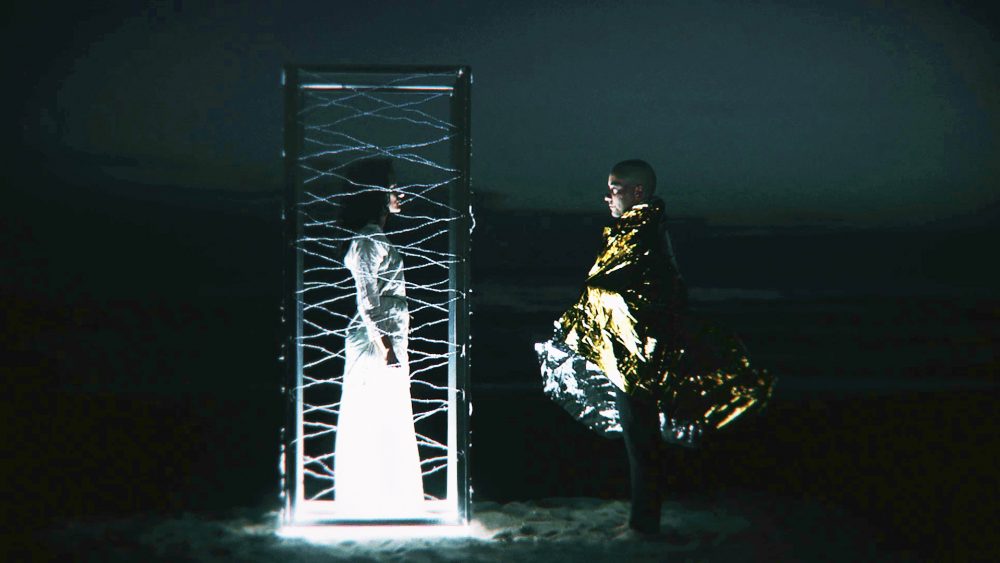 Food, water, book, language, beauty, earth, sea, love, warmth, man, woman, desire. What is our cage dividing us from? Is it blocking us? Or is it protecting us? The barbed wire is a simple structure, a cylinder-shaped object deformed by a light twisting, which stretches, in the room, from one point to another. Every 10 centimetres there is a small lock: its delicate shape breaks the linearity of the barbed wire like a lock gracefully curled. The barbed wire, thus, marks the border between existing a non-existing, between living and non-living, between being seen and being invisible. The cage envelopes us with its barbed wire from our innermost roots, dragging us in the shadow. This work introduces the solitude imposed on us by the cages we are living in. In the typical style of Lunardi, the work has been built around some tableau vivants which represent, through the body of the actors, some of the conditions which we experience on a daily basis in a society which is pervaded by egotism.

Marcantonio Lunardi was born in Lucca in 1968. Since 2001 he has been working in social and political documentation in the field of Media Art, creating installations, documentaries and video-art works. After the master’s programs at the Festival dei Popoli in Florence with Michael Glawogger, Sergei Dvortsevoy, Thomas Heis and Andrés Di Tella, he began a path in the cinema of moving images, experimenting with languages at the border between the cinema of the real and the video-art. His works have been screened in some eminent international institutions such as: The International Art Center, Toko; Galeri Nasional Indonesia, Jakarta; Fondazione Centro Studi Ragghianti di Lucca; Video Tage Center – Hong Kong; Museum King St. Stephen Museum – Székesfehérvár – Hungary. He also appeared in many other festivals of experimental cinema and video-art, like: Cologne Off; Festival Internacional de Cine y Video Experimental – Bilbao; OCAT Shanghai; Cairo Video Festival – Egypt; Festival Invideo Milan – Italy; Video Art & Experimental Film Festival – Tribeca Cinemas in New York City. He currently lives and works in the mountain village of Bagni di Lucca, about 25 km far from Lucca, in Italy.