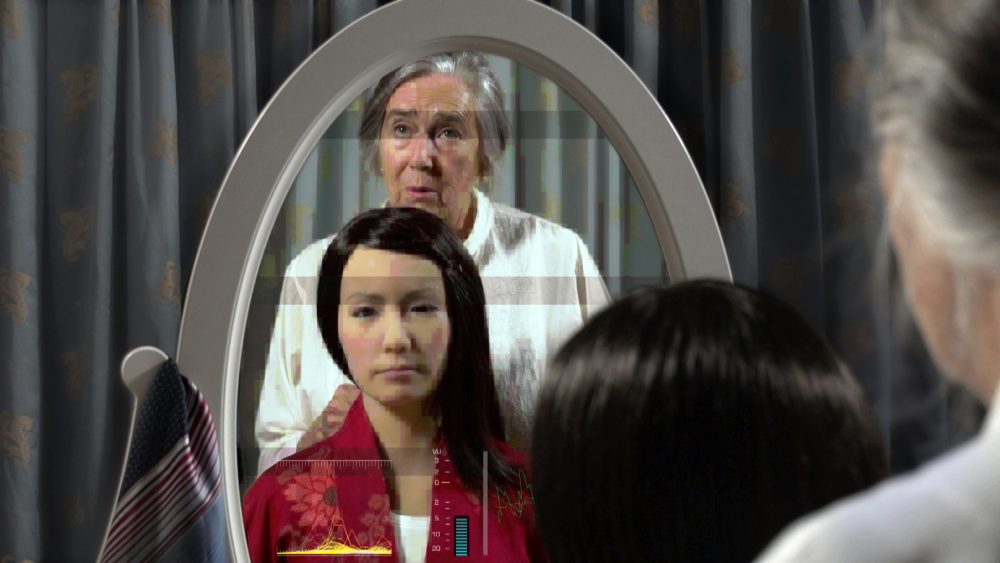 Pathetic Fallacy is an inter-generational dialogue about growing old. Youth doesn’t believe it will age. Age believes it knows best. Humans believe in the pathos of humanity. And the cycle continues.

Pathetic Fallacy was the first dialogue drama created for screen involving an Actroid (Actroid-F by ATR Hiroshi Ishiguro Laboratories). A conventional mother–daughter, or Juliet–Nurse, figuration is applied to an unconventional scenario, revealing a new human–machine relationship.

The term ‘pathetic fallacy’ means the ascription of human traits or feelings to inanimate things. Pathetic Fallacy’s screenplay wraps the Japanese notion of kokoro (heart/soul/mind) around the subject of aging: of humans, of women, of technologies, of matter, of robotic or cyborg assemblages. The robot has the overconfidence of the (literal) digital native; the woman the overconfidence of the rational anthropocentric. They are both wrong; they are both right. The gynoid will age, but not as the human elder thinks it will. Each character relies on what she perceives as empirical evidence to promote her own partial fallacy.

Knox has performed in ‘Living Museum of Fetishized Identities’ (La Pocha Nostra), ‘Music for the Eyes’ (CODA), and Jane Campion’s ‘Holy Smoke’. She is published in literary and academic journals internationally. Her electronic duo Actual Russian Brides is released on Brigade Music Berlin and Clan Analogue Recordings. Contact her at elenaknox.com