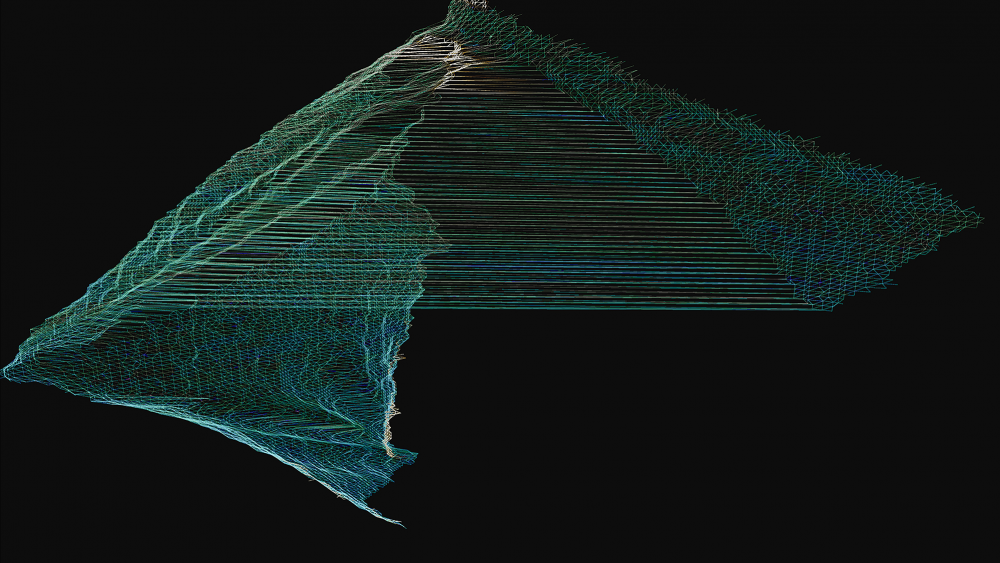 Isthar is inspired by the Assyrian mythological journey of Ishtar into the Underworld,  a short film about metamorphosis, a journey from abstraction to beauty,  from the wrapping geometries of darkness to grace, pulsing between the violence of change and the ever radical beauty of morphing angles & lines.

Ishtar is experienced as a sculptural piece, whose story unfolds through the continuous weaving and morphing of 3D mesh geometries.

The Assyrian legend of Ishtar spans multiple cultures, present in similar ancient Greek, Sumerian, Roman and Egyptian mythos. In the story, the goddess Ishtar passes through the seven gates of Hell, shedding her clothing at each gate, arriving undressed before the queen of the Underworld.

Ishtar, the goddess of fertility, sex, love and war, flits in and out of existence, collapsing and reshaping as she descends through the seven gates to finally fade into the abstract lines from which she originated.

“Exploring the relationship between movement, volume and texture, I am looking for the grace of an aesthetic inspired by mesh geometries, in order to deconstruct the beauty of sculptural movement.”

She’s interested in the implication of the digital process on identity and its fragmentation, exploring and questioning it through digital bleed, time displacement, and through the sculptural quality of time in 3D Aesthetics.

For over a decade, she has been writing and creating radical visual pieces, which inhabit and cross over the world of film, dance, fashion, and code.  She works through multidisciplinary collaborations to explore new expressions and conversations.

Her work has been featured in Taschen, WIRED, The Creators Project, Prosthetic Knowledge, and POSTmatter.