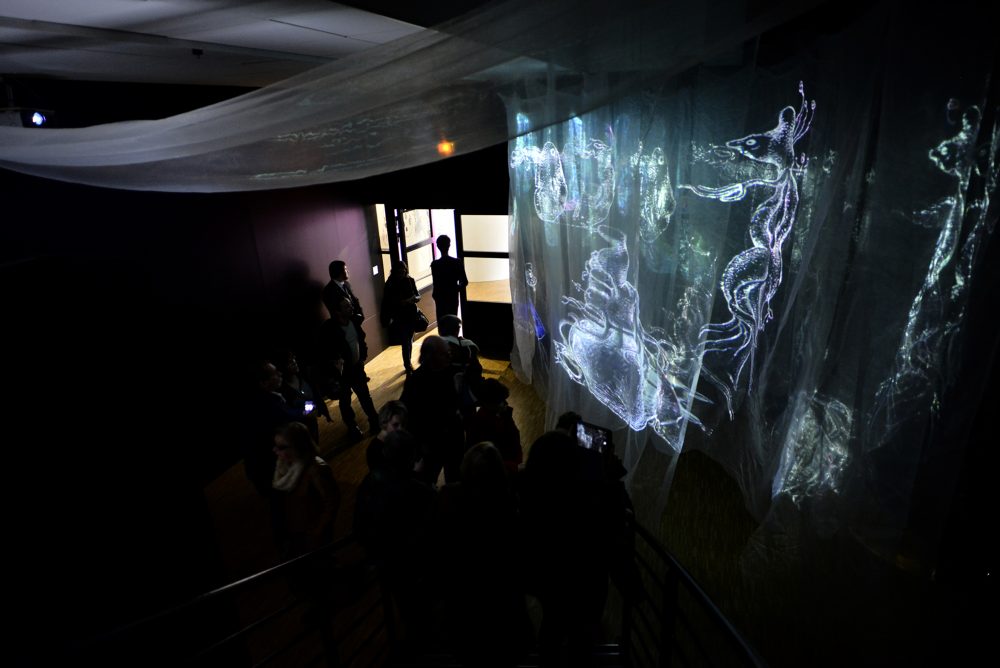 Lumina Fiction is an immersive and interactive multimedia work that takes viewers on a journey into an imaginary world that could be described as a biological fiction. In a spacious and obscure space, a spatial structure composed of layers of a translucent veil occupies the space like a floating organic architecture. Tiny luminous, chimerical, and imaginary creatures come to life on the veils of this giant body. They evolve and move, displaying and giving life to a biological fiction in perpetual change. Atmospheric sounds emerge discreetly and evolve according to the states of this universe. Being both autonomous and sensitive to external presence, this fictitious ecosystem triggers visual and sound reactions and evolves with the behavior of the visitors. Lumina Fiction proposes a creation, a system, inspired by life principles and a real ecosystem, and uses new technologies to incarnate those behaviors inspired by biological reality.

At first self-taught, he deepened his musical knowledge at the University of Pau,  at the Academy of Gennevilliers and at the Higher National Conservatory of Music of Lyon.
Responsible of the musical production of the Groupe de Recherches Musicales (Paris) from 1991 till 2005, he is today settled in Toulouse  where he manages the technical coordination for the collective of composers éOle.
From 2007 till 2012, he was a speaker at the University of Toulouse Mirail, department Plastic arts Decorative arts on sound and interactivity. His works are firstly dedicated to the acousmatic music and he received commissions by G.R.M.,
DAAD of Berlin, the Ministry of Culture…
He was a grant holder of the DAAD and the Technical University of Berlin in 1999/2000.
He collaborated repeatedly with dance and theater (Cie Pal Frenak. Cie Coda Norma, Cie Hypothèse Théâtre) and works since 2011 with the composer Hervé Birolini on live performances.

At the origin of her work as a visual artist, Golnaz Behrouznia has always been interested in the natural sciences, in the observation of microscopic life and
through that, life in all its dimensions. Today it is with her artistic vision that she reconnects with her passion for the living. The media she chooses, sculpture, video installation, and drawing support this idea: to create a hybrid world,
bringing the biological together with visual art…
Born in 1982 in Shiraz, Iran, Golnaz BEHROUZNIA turned towards the visual arts at a very young age. She graduated from the School of Fine Arts in Tehran and
pursued her art career in Iran and then in France from 2008, studying digital creation in Toulouse. Since 2010, she has presented her works in the form of interactive video installations, drawings and sculptures, in different places such as the museum “Les Abattoirs”, the “Salle des Illustres” and “Ciam-La Fabrique” in Toulouse, the “Aubette” room in Strasbourg, the “PAD” exhibition, the “Vita
Nova” exhibition in Paris, the Biennale Bains Numériques in Enghien les Bains, the exhibition “Crossing art, science and the environment” in Tunisia and the exhibition “Are We Already Gone” in New York.”
SHARE /