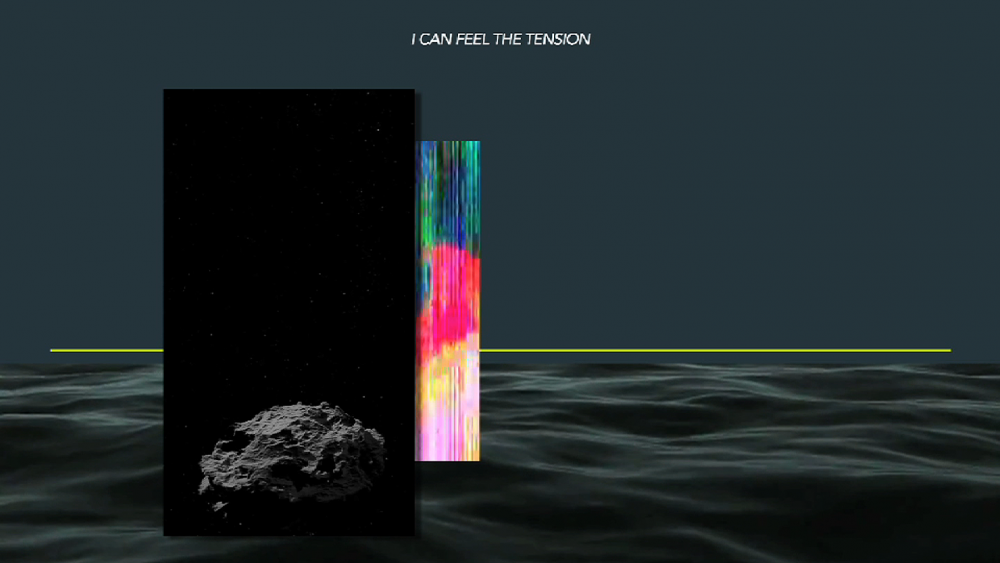 In her film I Want to Be Like You, Schürrer confronts a self-authored script with a series of commercial images, floating above a dark, extra-terrestrial sea. The soundtrack completes the immersive experience, with aural elements ranging from waves crashing, to a glitchy 90s sound of dial-up internet connecting over a phone line. There is something reassuring about these sounds and visions, triggered by certain everyday sounds or feelings: soft whispering, hair brushing, a bottle satisfyingly popped open.

The process of Schürrer’s practice often begins with a text, an almost lyrical ode to a series of terrifying platitudes, which she juxtaposes with similarly ominous placid images. In I Want To Be Like You she inverts the relationship of subject and object, questioning which one has dominance over which. In this way, she engages philosophically with the age-old subject-object divide. The title of the piece suggests a will to re-materialize ourselves, to feel ourselves more tangible in an increasingly automated world. Notions of efficiency and optimization are increasingly being applied to people and boundaries often become blurred. Through a repetition of visual commercial trends – crisp folded towels, 3D printers and sleek, penile tech gadgets lovingly orbiting themselves – Schürrer reinforces the inherent absurdity of current advertising tropes. Shiny, flowing shampoo-model hair and perfectly formed hen’s eggs meet the words: “time is racing and our hysteria is globalised”.

Dagmar Schürrer is a Berlin-based artist from Austria, who studied Fine Art at Central St. Martins College of Art and Design in London. Since her graduation in 2011 her work was selected, amongst others, for New Contemporaries 2011 at the ICA, London, the 2013 Impakt Festival in Utrecht, NL, or the Fullframe Festival 2014 at the MUMOK Kino, Vienna. She was shortlisted for the Berlin Art Prize in 2013 and in 2016 she was accepted for the Goldrausch Künstlerinnen scholarship in Berlin. In both 2013 and 2016 she was shortlisted for the Tenderpixel Award in London, UK. 2016 she was selected to show her work at the 5th Moscow Biennale for Young Art.