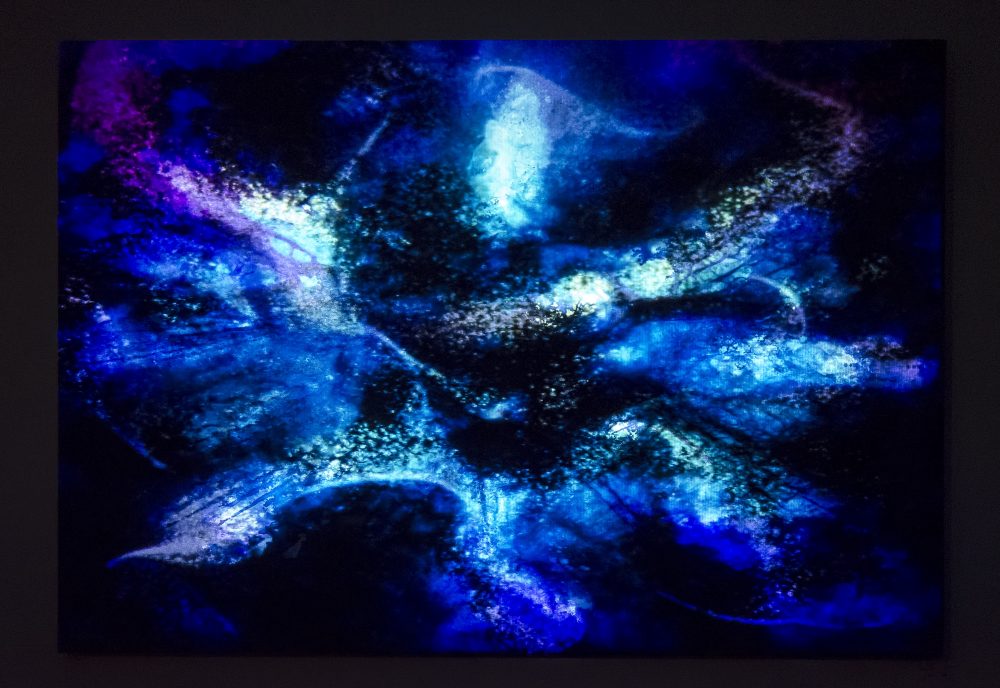 QUARKS is a projection-mapped painting, which unfolds the interaction among 3 different quark of art: Painting, animation and sound design.

Quarks are never directly observed or found in isolation; their strong interaction with others is mediated by chromodynamics. Particles are constantly exchanged between quarks through a simulated emission and absorption process. When a particle is transferred between quarks, a color change occurs.

In Quarks, chromodynamics are initiated by Gizem Renklidag’s painting technique, which can be described as analog materialization of viscosity among particles of dyes. Ahmet Said Kaplan digitally re-fluidizes the materialized dye particles on canvas and augments a new dimension of time and matter by generating the color emission and absorption processes. Filiz Sert creates the third interaction fold by cosmic sounds. Fractal folding processes of quarks of projection-mapped dye particles reaches to macro dimensions by way of ultra sounds. While each quark particle’s color constantly changes, their strong interaction is preserved.

Gizem Renklidag is an multidisciplinary artist based in İstanbul, Turkey.

She studied in several universities as Combined Arts from Yıldız Technical University, Faculty of Arts & Design in Istanbul, University of Siegen, Germany in the Faculty of Arts where she focused  mainly on printmaking techniques and metal sculpture besides her works based on painting and installation.

She designed several theatre stages, decorations and installations at open air festival. She was invited as a resident artist to the Czech Republic and designed a stage for the Lunchmeat Festival in collaboration with Nohlab in 2013.

She worked as a producer of several art and exhibition projects in collaboration with well known visual artist & collectives from Turkey.

Renklidag is the curator of Istanbul Maker Faire. She emphasises the value and the importance of the collaboration between different art disciplines thus she organised several activities, meetings in cooperation with Amber Platform Art & Technology Festival in Istanbul, in order to connect artists and makers.

Renklidag is currently working as a lecturer in two universities in Istanbul, teaching New Media Arts and Contemporary Arts and Science &Technology.

Ahmet Said Kaplan interest through digital art began in early ages. He tried to visualize various sounds from many artists, including minimal techno label MINUS. After creating many music videos and animations, he became interested in real time visual production, performances and interactive installations. During 2014, he began touring internationally to perform live visuals for the inspiring techno artist Jon Gaiser, with the support of Ali M. Demirel. He is co-founder/creative director at DECOL and continuing to experience media art in Istanbul Bilgi University Visual Communication Design master programme.

Filiz has interest in music for as long as she remembers. She studied music in high school and in college and after she decided to create something ‘different’, she started to create a fusion of atmospheric piano themes and humming cold layers of synthesizers, bringing KAOSMOS to life.

THE SUN HIDDEN THERE