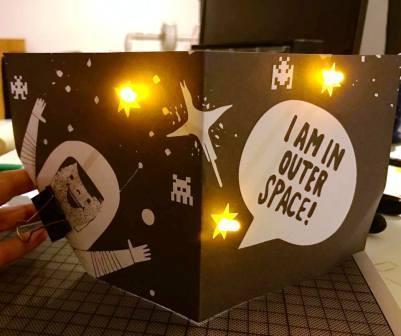 Combining science and art, paper electronics revolve around the axis of electricity and handcrafting. With this workshop, kids will gain knowledge about electrical circuits while enhancing their creative skills. Lights, sensors, and batteries are used alongside stickers, glitter and scissors in the most unexpectedly artistic experiment.

Mariana Anthropelou designs and creates sports activities, games, and building workshops. Through her studies in visual communication and pedagogy, but also through her broad network of specialized scientific partners, she has realized playful actions for kids and adults. Alongside Alexandros Kalfoglou, they founded Gamely, a game-library that promotes and presents games as omnipotent functions.

She studied Visual Communication at the Kingston University, London, and Pedagogy at Merton College, London.

First year Bachelor student in Games Programming (BSc) at SAE. I have participated in the “interactive paper neighborhood” which was presented at the Rematias Festival, and the “Wheeling 2 help” in August 2016 while I was part of the Athens Science Festival 2017. When I am not studying game theory or coding, I organize workshops for the company Gamely, which are hosted by Impacthub athens, “Chartorama” bookstores, and the 3rd Big Celebration for Children (The smile of the child). The big variety of workshops matches the playful attitude of their founders, as well as the audience they entertain every time. Starting with Gamely.gr, a project where people learn through creative activities and games, studying different ways of developing analog games where users can learn new interesting things through the act of play.