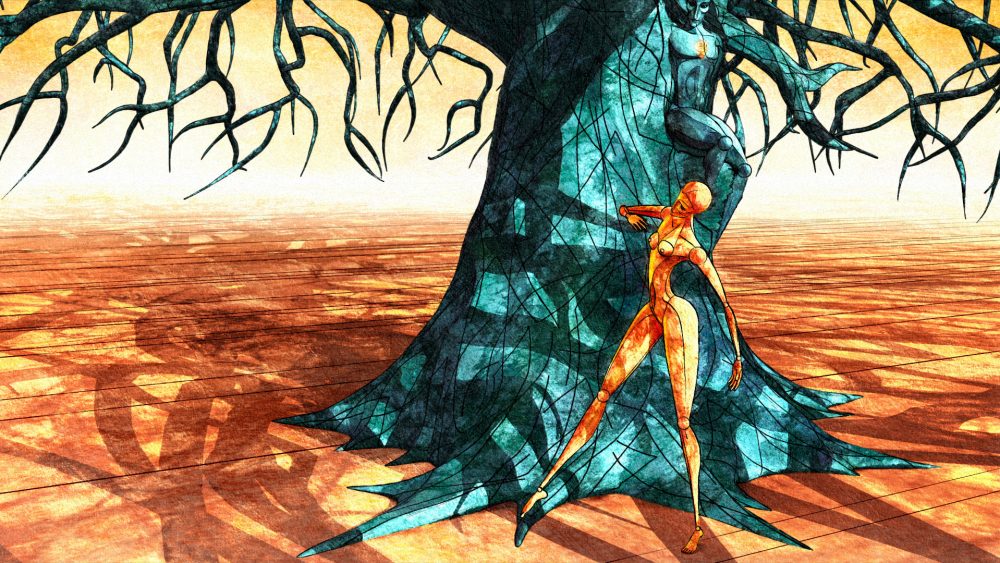 An artistic impression, driven by the rhythm of the music and the freedom of the dance, creates a magical world, where Love is the leading metaphysical force that overpowers life and death.

The inspiration came from the Bulgarian folklore traditional music, where there are stories of burning, devastating and tragic love, filled with tenderness and self- renunciation. She then decided to reveal those strong emotions through the characters of a girl, born from the sun, transforming into the Firebird, symbolizing freedom, fiery passion and beauty, and a man, embedded into a tree – symbol of the ground, the static and restricting power … but still deeply sensitive and fragile.
My goal is to take the viewer on a journey driven by the music and the dance, of such kind of dramatic, but beautiful and magical fairy tale where the love rules the whole universe and stays eternal even in the death.

Velislava Gospodinova is born 1986 in Sofia, Bulgaria, is a radiant, cheerful person with dark imaginative mind and crazy twisted dreams. She graduated with a  Masters degree in Animation Directing at New Bulgarian University in Sofia. Her graduation film from 2009 – “The Lighthouse (“Farat”)” has been screened to more than 100 international film festivals, has been certified with numerous awards and has succeeded to win the attention and the recognition of renowned film professionals and critics nationally and internationally. “The Blood (“Kravta”)” – 2012, is her debut film. It is supported by the Bulgarian National film center and it had recently ended its successful festival run, very well received, with couple of awards and already more than 30 screenings. For over 10 years now, Velislava also works commercially in the field of visual effects and 2D compositing. She is a freelance art director, compositor and animator. In 2010 she was selected and participated in the prestigious Berlinale Talent Campus. In 2014 she founded her own production company in Sofia – “Red Stroke Ltd.” and just finished the production of her new short animation film – “Firebird (“Zhar Ptitsa”)” – 2016, supported again by the Bulgarian National film center.