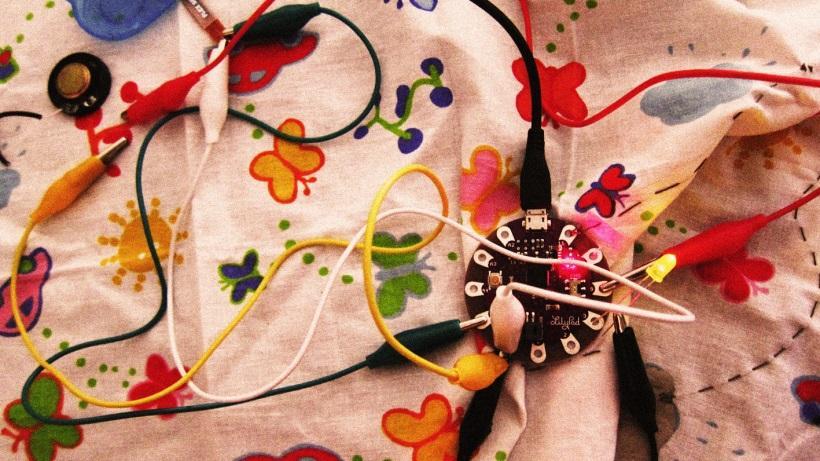 During the workshop “Wear a sentiment”, kids will get in touch with interactive technology and the magic of performance art. Inspired by the way they communicate their feelings either on a personal level or through technology, the kids will explore with new materials, will get acquainted with improvised circuits and will reconsider clothes, as an extension of the body and wearable interfaces.

Marilena Georgantzi (1987, Athens) is an architect and scenographer, NTUA graduate (2010). In 2012, she completed her master studies in IAAC on new media technologies and digital fabrication. Currently she pursues a Master’s degree in Graphic Design and Multimedia in Hellenic Open University. Her focus lies on interactive technologies and specifically on perception and experience of space through them and on emergent theatricalities created by them. From 2012 she has worked on architecture firms in Greece and abroad (A&M Architects etc.), as a project manager in Space Under, an independent center for research in new media technologies and as an independent artist. Finally, she designs web applications with Cocoon solutions Team, focusing on cartography.

Evi Souli is a graduate of the professional school of dance “Rallou Manou” (2007 – 2010) while she studies in the Athens Kapodistrian University. She has attended numerous seminars on classical and contemporary dance, improvisation and choreography with instructors like Cynthia Frida, Eulalia Ayguade Farro, David Zambrano, Elia Lazaridi, Antoni Foniadaki, Angeliki Stellatou, Patricia Apergi etc. She has collaborated with dancers, dramaturgists, directors like Charis Mantafounis, Mariela Nestora, Aliki Kazouri, Betty Dramisioti, Angeliki Tatou Dede, Katerina Gianakopoulou, Angelos Frantzis, George Koumentakis. She has also participated in festivals like Αthens Biennale (2011), Artogether festival (2011), Athens video dance (2012), Citrus festival (2013) and in events in Theocharakis Foundation, Onassis Cultural Centre (2012), Benaki Museum (2016 ), Hellenic Theater / Drama educational network (2016). Her choreography “Arsi/Thesi” was staged in February 2015 which was also selected in Νew Europe Festival 2015 Jarmila Jerabkova Award in Prague. In May 2016 her choreography “Beyond Collapse” was staged with original music by Pavlos Pavlidis. Evi is a practicing dance teacher while she has instructed numerous workshops for adults (ex.’Can we dance our memories?’) and for teenagers (ex. Wearable Narratives, OCC, 2016).