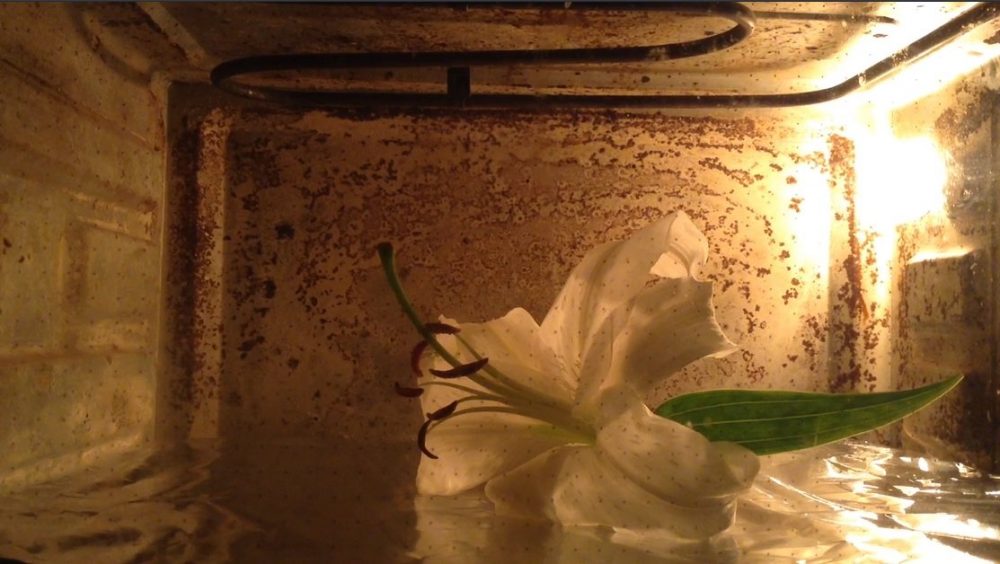 Unstill Life-Exquisite Corpse explores the relationship between life, beauty, death and revolt. How still is really “still life”? Where does disintegration start and stop? The video attempts to reveal life as an artistic phenomenon, death as a continuing process, questioning the in-between space between the two by means of the accelerated “murder” of a flower, an emblem of beauty and stillness in visual arts worldwide.
The flower is put in a space alien to its nature, an oven. However, the ambiguity of the space depicted on the video gives rise to metaphorical spaces, such an industrial warehouse interior and simultaneously a theatre stage. Suddenly, we witness the flower becoming a protagonist in the drama of disintegration and death in post-industrial era. Its witnessed disintegration resembles theatrical action, but, at the same time, causes connotations about the failure of civilization to foster sustainability and threaten nature as we know it with global warming. The symbolic violence hidden behind the accelerated disintegration process triggers thoughts also on war and genocide. The future is already past, and past is already future, as time collides but triumphs over matter and form.

Magenta artistic collaboration was born from the need to explore the crossroads between visual arts, theatre-performance and media. Magenta’s founding members are Katerina Sotiriou, visual artist/set and costume designer, and Elena Timplalexi, theatre director, playwright and post-doc researcher in Theatre Studies. Other artists and performers may be invited to join in the creative process depending on each project.

Theatre, a background for both of us involved in Magenta, becomes both a source of inspiration as well as reaction.
Magenta’s works include video art projects, installations and performances, that have been presented in Greece (Miden festival, metamatic:taf, Sphinx festival, Beton 7, Kinitiras studio) and abroad (Madatac_Madrid, Artzond festival_St Petersburg).